Description: Historical Note: The Spindletop oilfield, discovered on a salt dome formation south of Beaumont in eastern Jefferson County on January 10, 1901, marked the birth of the modern petroleum industry. The Gladys City Oil, Gas, and Manufacturing Company, formed in August 1892, was the first company to drill on Spindletop Hill. Three shallow attempts, beginning in 1893 and using cable-tool drilling equipment were unsuccessful. Anthony F. Lucas, the leading United States expert on salt dome formations, made a lease with the Gladys City Company in 1899. Pattillo Higgins (of the Gladys City Company) and Lucas made a separate agreement a month later. With Lucas in charge of the drilling operation, another attempt was made on the John Allen Veatch survey on Gladys City Company lands. Lucas was able to drill to a depth of 575 feet before running out of money. He was also having great difficulty with the tricky sands of the salt dome. Despite the negative reports from contemporary geologists, Lucas remained convinced that oil was in the salt domes of the Gulf Coast. He finally secured the assistance of John H. Galey and James M. Guffey of Pittsburg. Much of the Guffey and Galey support was financed in turn by the Mellon interest; their terms excluded Higgins and left Lucas with only a small share of the potential profits. Nonetheless, Lucas pressed ahead in his effort to vindicate his theories. Galey and Guffey played a crucial role by bringing in Al and Curt Hamill, an experienced drilling team from Corsicana. Lucas spudded in a well on October 27, 1900, on McFaddin-Wiess and Kyle land that adjoined the Gladys City Company lands. A new heavier and more efficient rotary type bit was used. From October to January 1901, Lucas and the Hamills struggled to overcome the difficult oil sands, which had stymied previous drilling efforts. On January 10, mud began bubbling from the hole. The startled roughnecks fled as six tons of four-inch drilling pipe came shooting up out of the ground. After several minutes of quiet, mud, then gas, then oil spurted out. The Lucas geyser, found at a depth of 1,139 feet, blew a stream of oil over 100 feet high until it was capped nine days later and flowed an estimated 100,000 barrels a day. Lucas and the Hamills finally controlled the geyser on January 19, when a huge pool of oil surrounded it, and throngs of oilmen, speculators, and onlookers had transformed the city of Beaumont. 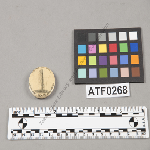