Description: Lock of hair, gray / black. The locks of hair are placed within an envelope on which there is some writing. The envelope also includes fragments of what is presumably the original mailing envelope, which looks burned (black spots). Writing on the envelope: Col. Benj. R. Milam, Col. B.R. Milam, San Antonio and 7th Dec. 183?. On the top of the outer envelope is written: Photos, framed (misc.)

Description: Historical Note: Benjamin Rush Milam was born on October 20, 1788 to Moses and Elizabeth Pattie Boyd Milam in Frankfort, KY. He fought in the War of 1812 with the 8th regiment, 39th infantry company of the Kentucky militia, serving from August 17 to December 8, 1812. By 1818, Milam was in Texas, trading with the Comanche Indians on the Colorado River. The following year he joined Jos� Felix Trespalacios and James Long in what became known as the Long Expedition, working to separate Mexico and Texas from Spain. Milam became a Mexican citizen under the new constitutional government on June 24, 1824, and was commissioned as a colonel in the Mexican army. On January 12, 1826 Milam signed a contract granting him permission to establish Milam's Colony. The agreement required that he settle 300 Catholic families on the land within six years. Milam failed to do so and the contract expired on January 25, 1832. The claims of the 52 families in Milam's Colony were therefore in question. In 1835, Milam convinced the governor of Coahuila and Texas, Agustin Viesca, to grant land titles to Texas settlers. Shortly thereafter, however, Antonio Lopez de Santa Anna overthrew the government and captured Viesca and Milam on June 5, 1835. Milam escaped in October and joined a band of Texans under George Collinsworth who were fighting for independence from Mexico. They captured Goliad and then marched to San Antonio. On December 4, Milam heard that most of the men had given up the plan to attack San Antonio. 300 men volunteered to attack San Antonio with him, and the attack began on December 5, 1835. Four days later, General Martin Perfecto de C�s and the Mexican army surrendered. Milam did not live to see the victory, however; he was killed by a sniper's bullet on December 7. Milam is believed to be buried in Milam Park in San Antonio, TX.

Size or duration: not measured due to fragile nature of item 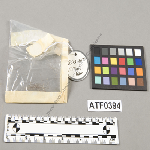 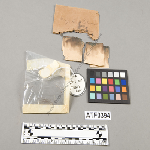