Note: Not all materials in this collection have been digitized. 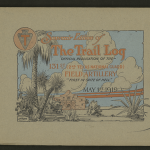 Arrangement of the records

Materials are arranged as received.

The 36th Division, also known as the “Texas Division” and the “T-Patchers,” was organized at Camp Bowie (then in Fort Worth, Texas) on July 18, 1917 from National Guard units. The division served in France during World War I, remained for occupation duty, and then returned to Camp Bowie and was released from active duty on June 20, 1919.
On November 25, 1940, the 36th Division was once again called to active duty at Camp Bowie in Brownwood, Texas. The 36th Division finally saw action on September 9, 1943, when they landed at Paestum, Italy in the Gulf of Salerno. They were the first American combat unit to land in Europe. They spent the next 11 months fighting in the Italian campaign. On August 15, 1944, the 36th Division left Italy and landed on the beaches of Southern France. They fought their way northward in France, entered Germany and Austria, and served until the war ended in May of 1945. After six months as occupation troops, the 36th Division returned home.
After World War II, the 36th Division became part of the Texas National Guard. In 1968, the Division was deactivated. Today, its lineage and honors rest with the 36th Brigade of the 49th Armored Division of the United States Army.

Restrictions on Use
Under the Copyright Act of 1976 as amended in 1998, unpublished works are protected for the life of the author plus 70 years. The term of copyright for published material varies. Researchers are responsible for complying with U.S. Copyright Law (Title 17 U.S.C.).

These records were donated to the Archives and Information Services Division of the Texas State Library and Archives Commission by the Thirty-Sixth Division Association on March 15, 1972.