The Comptroller is the central accounting officer or chief fiscal officer of the state, and as such is responsible for maintaining effective methods for accounting for the state’s funds. He or she is the state’s principal tax administrator and collector of tax revenue. The Comptroller must also provide the research and statistics necessary for revenue estimating and certification. 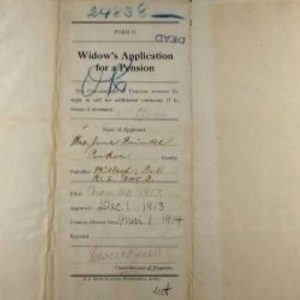 The contents of each file vary but nearly always include a four-page application containing the basic information listed below, plus affidavits of witnesses to the military service, an affidavit of a physician as to disabilities if applicable (especially prior to 1909), certificates of the county judge and county commissioners who approved the application at its initial level, and (between 1909 and 1930) a certificate of the state and county assessor as to the value of any property. Also usually included in the file is a request from the Comptroller or Commissioner of Pensions to the U.S. War Department (Adjutant General’s office) for proof and details of military service, accompanied by the official reply. Beginning in 1917, most files also contain a mortuary warrant application and a copy of the warrant for payment. Other materials may include: additional affidavits and interrogatories relating to any of the requirements for eligibility; correspondence between the Comptroller or Commissioner of Pensions and the applicant, relatives, or friends; original discharges; death certificates; printed material, including newspaper clippings; etc. For a more detail description of the process and records please see the online finding aid at the link given below.