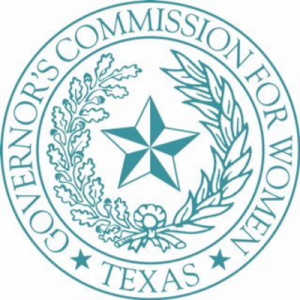 Creator: Texas. Governor (2000-2015 : Perry)
Title: Governor’s Commission for Women records
Dates: 1988-1990, 1993-2014
Dates:  bulk 2001-2013
Abstract:  The Governor’s Commission for Women (GCW) was created in 1967 to serve as a liaison between Texas women and government agencies, as well as private entities addressing women’s needs. A division of the Office of the Governor, the commission specializes in outreach, education, research and referral services. These records primarily document the activities of the GCW during the term of Governor Rick Perry. Dates include 1988-1990, 1993-2014, with the bulk dating 2001-2013. While the electronic records are entirely from Governor Perry’s term in office, a significant portion of the paper records are from the terms of governors Ann Richards and George W. Bush. The records document the focus areas and projects that the commission was involved with, including health and wellness, military family assistance, teen dating violence prevention, women in business, and local women’s commissions in Texas.
Quantity:  3 cubic ft. and 69 MB (529 files)
Language:  These materials are written predominately in English, with one electronic file in Spanish.
Repository:  Texas State Archives
Click here to enter the records

A description of non-electronic records described in this finding aid is available at https://txarchives.org/tslac/finding_aids/10289.xml.

Records are typically organized in the order as received from the agency, chronologically and by subject for the most part. Some electronic records have been reorganized and/or renamed for the purpose of clarity and this action is noted in the series where applicable. The records are organized into eight series:

The Governor’s Commission for Women serves as a liaison between Texas women and government agencies, as well as private entities addressing women’s needs. The commission was created following President John F. Kennedy’s establishment of the United States Commission on the Status of Women in 1961. In 1967, Governor John Connally established the Texas Commission on the Status of Women, a group charged with exploring ways for women to continue participating in the domestic sphere while also contributing to the world around them. Its primary legacy was the preparation of a report on the status of women in Texas based on research in such areas as education, home and community, employment practices, and legal treatment. The commission operated without permanent staffing or funding and disbanded when Connally left office in early 1969.  (Click here to read more of the agency history.)

Scope and Contents of the Records

The Governor’s Commission for Women (GCW) was created in 1967 to serve as a liaison between Texas women and government agencies, as well as private entities addressing women’s needs. A division of the Office of the Governor, the commission specializes in outreach, education, research, and referral services. These records primarily document GCW’s activities during the term of Governor Rick Perry but also include a small portion of records from when Ann Richards and George W. Bush were governors. Dates include 1988-1990, 1993-2014, with the bulk dating 2001-2013. The paper records are almost exclusively from the terms of Richards and Bush. The electronic records are entirely from Perry’s term.

The extent of the electronic records is provided by the file size and the number of files and folders. The inventory does not list single electronic file or folder. Folder dates are not always accurate and may contain additional years than what is stated.

Formats of the original electronic files include word processing files (.doc, .docx), spreadsheets (.xls, .xlsx), PDFs, and PowerPoint. Digital files presented for public use will generally be PDF for text documents or spreadsheets. Files in their original format are available on request; restrictions may apply.

Electronic records described in the finding aid that are part of the Texas Digital Archive are indicated as such in the inventory. Restrictions on access to the content of records are applicable to physical and electronic records.

Restrictions on Use
Most records created by Texas state agencies are not copyrighted. State records also include materials received by, not created by, state agencies. Copyright remains with the creator. The researcher is responsible for complying with Copyright Law (Title 17 U.S.C.).

Technical Requirements
Researchers are required to use gloves provided by the State Archives when reviewing photographic materials.

These records were transferred to the Archives and Information Services Division of the Texas State Library and Archives Commissionby the Texas Office of the Governor in paper format between December 2014 and March 2015 and in electronic format on January 29, 2015.