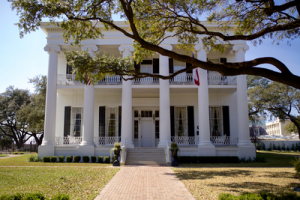 A description of non-electronic records described in this finding aid are available at https://txarchives.org/tslac/finding_aids/80034.xml.

The Texas Governor’s Mansion served as the official residence of Texas Governor Rick Perry and his family for his term of office. Using a $14,500 appropriation from the Texas state legislature, the Texas Governor’s Mansion was designed by Abner Cook. Governor Elisha Pease and his family became the first occupants of the Mansion shortly thereafter. Extensive renovations to the Governor’s Mansion were completed in 1982 during the residency of Governor William Clements and his family. The mansion underwent deferred maintenance in October 2007 to replace plumbing and electrical systems, install indoor fire sprinklers, and improve handicap accessibility. All historical furnishings, art work and antiques were moved to a storage facility at this time, and Governor Perry and his family temporarily moved to an alternate location. On June 8, 2008, the mansion was targeted by an unidentified arsonist and sustained extensive damage to both the interior and exterior of the structure. First Lady Anita Perry announced the Texas Governor’s Mansion Restoration Fund (TGMRF) on June 15, 2008. The fund eventually raised $3.5 million dollars in donations from multiple state agencies, preservationists, history enthusiasts, corporations, and private citizens. An additional $21.5 million dollars was appropriated by the Texas legislature for restoration. Reconstruction of the mansion continued from October 2010 to August 2011. In June 2012, the restoration of the Governor’s Mansion was completed and its historical furnishings returned.

Public relations records are dated 1949, 1973-1989, 2003-2013, bulk 2008-2014 and include promotional materials, correspondence, speeches, memoranda, notes, financial records, audio and video of files of public service announcements (PSAs), CD-ROMS, computer floppy disks, photographs, photo requests, articles, publications, and related records. This series contains both paper and electronic. All other series described in this finding aid are electronic only. Prominent Texans featured in the PSAs include Clay Walker, LeAnn Rimes, Dean Cain, and George Strait. Next, the Mansion education and outreach files focus on educating the public, particularly school-age children, on the history of the Texas Governor’s Mansion and include educational curricula, digital images from a taping done by the Texas Education Agency, a children’s activity book created by the Daughters of the American Revolution, and related records, dated 2008-2013. The Office of the First Lady files of Texas First Lady Anita Perry pertain mostly to fundraising efforts conducted by Anita Perry on behalf of the Governor’s Mansion restoration efforts and include school visits, radio interviews, and press conferences, dated 2001-2014. Other records include recipes and samples of frequently asked questions about the Governor’s Mansion.

The Mansion images series consists of graphic images of the Texas Governor’s Mansion, its grounds and inhabitants, and related records, dated 2002-2014. Topics range from events such as Christmas at the mansion and outdoor picnics to extensive documentation of the appearance of the mansion before the catastrophic fire of 2008. The Mansion restoration files are comprised primarily of images and related records documenting the extensive damage to the Governor’s Mansion caused by fire in June 2008, the fire itself, and restoration of the mansion thereafter, dated 2003-2014. Among the earlier images are several scanned (and some born digital) images of the Governor’s Mansion and its occupants at various points throughout the building’s long history. The Texas Capitol and flag images are digital images of the Texas Capitol and the Texas state flag, dated 2001-2011. Most are stock images from Shutterstock.

Researchers are required to use gloves provided by the Archives when reviewing photographic materials.