Description: Grooved shell with ridged base.

Description: Historical Note: Unexploded shell shot by Howell's Battery, Gano's Brigade, Maxey's Division, confederate soldiers army at the Battle of Cabin Creek, Cherokee Indian Nation (now Oklahoma) on September 20, 1864. Captain Sylvanus Howell organized Howell's Company Light Artillery, also known as Howell's Battery and the Eleventh Texas Field Artillery, on April 22, 1862, four days after acquiring four guns. Howell recruited most of the men for his battery from Fannin County, Texas, and the battery served most of its time in the Indian Territory, Arkansas, and Missouri. While part of Gano's Brigade, Howell's Battery fought in the battle of Poison Spring in Arkansas and the Second Battle of Cabin Creek in the Indian Territory. After the later engagement, the battery covered the retreat of Gano's Brigade, allowing the rest of the brigade to safely carry off the large supply cache they captured after the battle. By May 1865 Howell's Battery disbanded as part of Sam Bell Maxey's Division. The Cabin Creek Battlefield was the site of two important engagements between Union and Confederate forces in Indian Territory during the Civil War. The site is located along the Texas Road, a historic trail from Kansas to Texas, near the ford that crosses the creek. The road was used by Indians, white explorers, U.S. Army, pioneer immigrants, trail herds, and traders. Gano's Brigade existed from its formation in the summer of 1863 to its reassignment under Gen. Hamilton Bee in early 1865. Though the units that composed the brigade changed throughout its existence, they were the Twenty-ninth Texas Cavalry Regiment, the Thirtieth Texas Cavalry Regiment, the First Regiment Arizona Brigade, the Fifth Texas Partisan Rangers, the Thirty-third Texas Cavalry Regiment, Welch's Texas Cavalry Company, Wells's Texas Battalion, the Eleventh Texas Field Artillery Battery, and the Seventeenth Texas Field Artillery Battery. Throughout its history Gano's Brigade fought alongside Confederate Indians, led by Gen. Stand Watie. The brigade's actions mainly consisted of raids on Union supply trains and troops maneuvering in Arkansas and the Indian Territory. 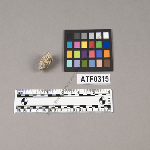 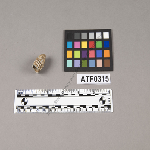