Description: Cap and ball pistol, .44 caliber. Has a blank crest on the back of the handle. A silver plate on the butt of the stock has engraved the battles that Thomas W. Masterson participated in: Eltham's Landing, Seven Pines, Mechanicsville, Gaines Mill, Malvern Hill, Freemans Ford, 2nd Manassas, Boonsborough Gap, Sharpsburg, Savage Station, Fredericksburg, Gettysburg, Chickamauga. In the center of these names is: Thomas Masterson, Brazoria, Texas.

Description: Historical Note: This pistol was used by Thomas W. Masterson in Hood's Brigade all through the Civil War. Masterson enlisted at the age of 18 and his father had a gunsmith make this pistol for him as a parting present. Hood's Texas Brigade was organized on October 22, 1861, in Richmond, Virginia. It was initially commanded by Brigadier General Louis T. Wigfall and composed of the First, Fourth, and Fifth Texas Infantry regiments, the only Texas troops to fight in the Eastern Theater. The First was commanded by Wigfall and Lt. Colonel Hugh McLeod, the Fourth by Colonel John Bell Hood and Lt. Colonel John Marshall, and the Fifth by Colonel James J. Archer and Lt. Jerome B. Robertson. On November 20, 1861, the Eighteenth Georgia Infantry, commanded by William T. Wofford, was attached. On June 1, 1862, eight infantry companies from Wade Hampton's South Carolina Legion, commanded by Lt. Colonel Martin W. Gary, were added, and in November 1862 the Third Arkansas Infantry, commanded by Colonel Van H. Manning, joined the brigade. Both the Georgia and South Carolina units were transferred out in November 1862, but the Third Arkansas remained until the end of the war. 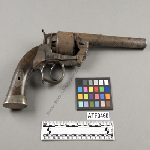 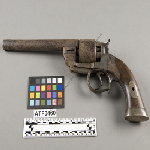