Description: Pieces of the first monument to the Alamo. Written on each of the four sides of the monument: 1). Thermopylae had her messenger of defeat but the Alamo had none, 2). Blood of Heroes hath stained me. Let the stone of the Alamo speak that their immolation be not forgotten 3). Be they enrolled with Leonidas in the host of the mighty dead. And 4). To the God of the fearless and free is dedicated this altar made from the ruins of the Alamo.

Description: Historical Note: Pieces of the first monument to the Alamo, originally a 10-foot-high statue, made of stones from the Alamo. In 1840, the San Antonio city council agreed to sell stones from the Alamo Wall to the Texas Legislature for 50 cents per cart load to build a memorial on the grounds of the State Capital. The monument was made by Mr. Nangle, a lapidary of Philadelphia, and Mr. Joseph Cox, a stone-cutter. When the Capitol was burned in 1881, the monument was all destroyed except the two pieces now in the State Library. The smaller piece was rescued from the debris by Colonel Stephen H. Darden and presented to the Daughters of the Republic of Texas, March 11, 1902. The larger is a segment of the upper part of the monument, and carved on it is the famous line by General Thomas Jefferson Green: "Thermopylae had her messenger of defeat..." This would seem to be the larger segment of the two. On February 23, 1836, at the Alamo in San Antonio, then called Bexar, Texas rebels led by William Barret Travis made their stand against Santa Anna's vastly superior Mexican army. On the second day of the siege, Travis called for reinforcements by writing a letter, signed Victory or Death, and dated February 24, 1836. Santa Anna's troops broke through on March 6. All of the defenders of the Alamo died.

Description: See ATF0385, ATF0391, and ATF0397 for additional fragments from the Alamo monument. 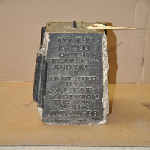 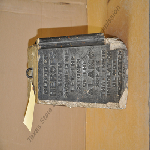 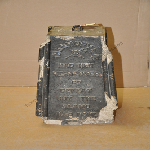 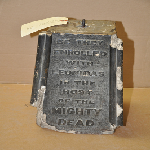