Description: The governor of Texas is the chief executive officer of the state elected by citizens every four years. Elisha Marshall Pease served his third term as governor of Texas from August 8, 1867, to September 30, 1869. Records of Governor Pease's third term relate predominately to the progress of Reconstruction in post-Civil War Texas. A large portion of the correspondence consists of letters, telegrams, and reports sent to military officials in Texas, particularly Generals Griffin, Reynolds, and Canby, which were then forwarded to the governor's office. Types of records are correspondence, including letters, petitions, telegrams, reports, lists, circulars, and letterpress books dating from September 1865 to September 1869 and undated, bulk 1867-1869.

Subject: Texas. Office of the Governor

Arrangement: Arrangement is chronological; letters having no specific day date have been placed at the end of the month. Undated letters are located at the end of the correspondence. Military communications were originally filed by the date written and not the date on which they were referred to Governor Pease. That order has been maintained. When records were rehoused in March 2014, items within existing folders were found to be out of strict chronological order at the item level; this arrangement was not altered during rehousing. Some proclamations related to the creation of a day of thanksgiving are filed after the correspondence files; letterpress books follow the proclamations. 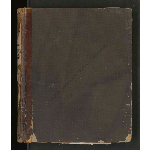