Description: The Texas Secretary of State is a constitutional officer of the executive branch of state government appointed by the governor and confirmed by the senate for a term concurrent with the governor's. These records consist of correspondence, both incoming and outgoing, of the office of the Secretary of State, dating 1846-1932, undated, bulk 1860-1930. Most of the 19th-century correspondence is incoming, and most of the 20th-century correspondence is both incoming and outgoing, usually filed together. This correspondence covers the wide variety of duties of the Secretary of State, including the following: appointments and resignations of notaries public, oaths (particularly during Reconstruction years, 1867-1870), the filing of bonds, state printing contracts, distribution of state laws (both copies of individual bills and sets of bound volumes), distribution of Texas Reports (opinions of the Texas Supreme Court), elections (e.g., certificates of election, reporting of election irregularities, requests for election supplies, etc.), claims for rewards, requisitions for extraditions and the capture of fugitives, the filing of corporate charters (including railroad charters), commissions and certificates of qualification for appointed and elected officials, franchise taxes, statements on the condition of banks, and lists of cases on civil and criminal dockets. 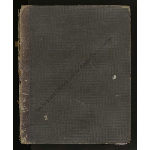