Description: Die casts, two pieces, for the State of Texas Medal of Honor to Apollo 11 astronauts. a). The State of Texas Medal of Honor. Apollo 11 astronauts. b). We Came in Peace, July 20th, 1969. The Apollo 11 astronauts (Neil A. Armstrong, Michael Collins and Edwin E. Aldrin Jr.) were the first to walk on the moon in July 1969. Texas presented the medals to them in October 1970. Obverse: The state seal of Texas has been incorporated in the design. The branch of live oak at the left of the star represents strength and the olive branch symbolizes peace. The reverse depicts the deployment of the flag of the United States on the surface of the moon by astronauts Neil A. Armstrong and Edwin E. Aldrin Jr., during the historic lunar landing mission.

Description: Historical Note: These are die casts of the State of Texas Gold Medal of Honor presented to the Apollo 11 astronauts: Neil A. Armstrong, Michael Collins and Edwin E. Aldrin Jr. The Apollo 11 astronauts were the first humans to step foot on the moon on July 20, 1969. Six hours after landing at 4:17 p.m. Eastern Daylight Time (with less than 30 seconds of fuel remaining), Neil A. Armstrong took the first step and he was joined shortly thereafter by Edwin "Buzz" Aldrin. The two astronauts spent 21 hours on the lunar surface. After their historic walks on the moon, they successfully docked with the Command Module Columbia, in which Michael Collins was orbiting the moon. Texas presented the Medal of Honor (originally intended as the Medal of Valor) to the Apollo 11 astronauts on October 17, 1970. The dies for the medal and a medal replica (ATF0472) were placed in the State Library to commemorate the historic achievement. 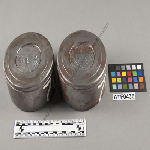 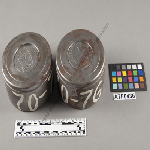