Commemorative key to the city of Odessa

Commemorative key to the city of Odessa

Title: Commemorative key to the city of Odessa

Description: Black and gold-colored key, oversized. Etched on the four sides of the rectangular gold-colored dedication on the spine of the key: Presented to Mark Wells White, Governor of Texas. Presented by Mayor Bob Bryant on behalf of Crime Stoppers. Presented in Odessa, Texas, September 29, 1983. On the occasion of his visit to Odessa, Texas.

Description: Historical Note: This key was presented to Governor Mark White by Mayor Bob Bryant on behalf of Crime Stoppers on the occasion of his visit to Odessa, Texas in 1983. Mark Wells White Jr. was born in Henderson, Texas, on March 17, 1940. He attended Houston public schools and Baylor University, earning a bachelor's degree in business administration in 1962 and a law degree from Baylor Law School in 1965. White worked briefly in a private legal practice in Houston before serving three years as an Assistant Attorney General. In 1969, he returned to Houston to a private practice until 1973 when Governor Dolph Briscoe appointed him Secretary of State. White resigned as Secretary of State in October 1977 in order to run for Attorney General. After being elected and serving as Attorney General from 1979 to 1983, he ran against and defeated Governor Bill Clements in the 1982 governor's race. Governor Mark White served as head of the state from January 18, 1983 to January 20, 1987. White was defeated by Clements in the 1986 election and returned to private life after his term ended in January 1987. He ran for governor in the Democratic primary in 1990 but lost to Ann Richards. He and his wife Linda Gale Thompson had two sons and a daughter. Mark White died on August 5, 2017. ATF0493: Commemorative key to the city of Odessa 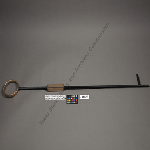 ATF0493_reverse: Commemorative key to the city of Odessa ATF0493_writing2: Commemorative key to the city of Odessa 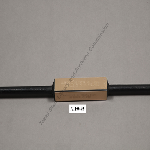 ATF0493_writing: Commemorative key to the city of Odessa