Texas Courts of Civil Appeals were first established in 1891 by constitutional amendment (Article V, Section 6). This expansion of the appellate system was designed to reduce the backlog of cases on the Texas Supreme Court docket. At a special session called to implement this amendment in 1892, the 22nd Texas Legislature, 1st Called Session (through Senate Bill 18) divided the state into three supreme judicial districts. Over the next century the judicial system expanded to fourteen supreme judicial districts. Boundaries of geographic jurisdiction have been specified by statute. Justices are elected by the voters of their districts for a term of six years.

The Texas Digital Archive includes only digitized items from collections. Full collection information is available in the finding aids.
https://www.tsl.texas.gov/arc/findingaids/recordsfindingaids.html 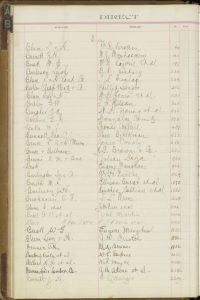 Creator: Texas. Court of Appeals (3rd)
Title: Texas 3rd Court of Appeals records
Dates: 1891-2009
Abstract: The Texas 3rd Court of Appeals has intermediate appellate jurisdiction of both civil and criminal cases appealed from lower courts in the 3rd Supreme Judicial District of Texas; in civil cases where judgment rendered exceeds $100, exclusive of costs, and other civil proceedings as provided by law; and (since 1981) in criminal cases except in post-conviction writs of habeas corpus and where the death penalty has been imposed. The records of the Texas Court of Appeals, Third District (previously the Court of Civil Appeals, Third District), are composed of indexes and registers, dockets, minutes, opinion records, case files, fiscal records, and motions that range in date from 1891 to 2009. Originally the 3rd Supreme Judicial District included all of south, west, and central Texas, but it eventually was reduced to 24 counties in central Texas; it meets in Austin. A portion of these materials has been digitized and is part of the Texas Digital Archive.

The index and register volume covering the period of 1892-1900 and 1900-1922 has been transcribed into a spreadsheet format, one per volume, and can be found alongside the digitized indexes. A look-up table derived from the spreadsheets can be found at the Texas 3rd Court of Appeals Index look-up table page. Use this table to look up information by Appellant, Appellee, or case number.