Governor’s Committee on People with Disabilities, 1995-2014

An Inventory of Governor’s Committee on People with Disabilities Public Relations Materials at the Texas State Archives, 1995-2014, bulk 2001-2014 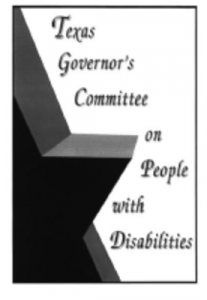 Creator: Texas. Governor (2000-2015: Perry)
Title: Governor’s Committee on People with Disabilities public relations materials
Dates: 1995-2014
Dates: bulk 2001-2014
Abstract: The Texas Governor’s Committee on People with Disabilities (GCPD) strives to ensure people with disabilities have the opportunity to enjoy full and equal access to live independently, productively, and with self-determination. Public relations materials are press releases promoting a specific event or award, achievements of an entity, disability access issues, and the selling of decals to benefit individuals with disabilities. Also present are speech scripts, award ceremony itineraries, and proclamations. Records date 1995-2014, bulk 2001-2014. Subjects include efforts in promoting accessibility and awareness for persons with disabilities. All records are electronic.
Quantity: 8.61 MB (94 files)
Language: These materials are written predominately in English with scattered Spanish throughout.
Repository: Texas State Archives
Click here to enter the records

A alternative description of the records described in this finding aids is available at http://www.lib.utexas.edu/taro/tslac/40125/tsl-40125.html.

These records are arranged alphabetically by award name, with other materials following.

See the inventory below for additional links to these records.

The Governor’s Committee on Employment for the Handicapped was first created by Governor Dolph Briscoe in 1978 through Executive Order DB-40. Executive orders by Governors William P. Clements in 1981 (WPC-14A) and 1987 (WPC 87-16) and Mark White in 1983 (MW-10) continued the committee and also changed the name to Governor’s Committee for Disabled Persons. In 1991 the Governor’s Committee on People with Disabilities was created statutorily by Senate Bill 381, 72nd Legislature, Regular Session, in order to continue the functions of the Council on Disabilities, a separate entity, which was abolished on the recommendation of the Texas Sunset Commission.

As of 2015, GCDP consists of twelve members appointed by the governor. At least seven committee members must have a disability. Representatives from six state agencies serve as ex-officio or advisory members. These state agencies are Texas Rehabilitation Commission, the Texas Commission for the Blind, the Texas Workforce Commission, and the Texas Commission for the Deaf and Hard of Hearing with a representative from the Texas Department of Licensing and Regulation serving as an advisory member. Members serve staggered two-year terms. Together the committee makes recommendations to the legislature and the governor in regards to disability issues, promotes compliance with disability-related laws, encourages networked committees to do the same at the local level, recognizes employers for hiring and retaining employees with disabilities, and recognizes students and media efforts to positively depict persons with disabilities.

Scope and Contents of the records

The Texas Governor’s Committee on People with Disabilities (GCPD) strives to ensure people with disabilities have the opportunity to enjoy full and equal access to live independently, productively, and with self-determination. As part of this mission, GCPD honors businesses, organizations, media, students, and other individuals who promote and assist with these opportunities. Public relations materials are press releases promoting a specific event or award, achievements of an entity, disability access issues, and the selling of decals to benefit individuals with disabilities. Also present are speech scripts for a specific event, award ceremonies itineraries, and proclamations for blindness awareness month. Records date 1995-2014, bulk 2001-2014. All records in this series are electronic. Records that predate Perry’s tenure as governor may have been used for background information on an award for the GCPD. Researchers should also be aware that some awards are for achievements accomplished the previous year. Years in file names may refer to either the year of the achievement or the year of the award ceremony.

Electronic records described in the finding aid that are part of the Texas Digital Archive are indicated as such in the inventory. Restrictions on access to the content of records are applicable to physical and electronic records.

Formats of the original electronic files include word processing or plain text files (.doc, .docx, .txt), PDFs, and web-ready images (.htm). Digital files presented for public use will generally be PDF for text documents. Files in their original format are available on request; restrictions may apply.

Restrictions on Access:
Because of the possibility that portions of these records fall under Public Information Act exceptions including, but not limited to: private information about an individual (Texas Government Code, Section 552.101), an archivist must review these records before they can be accessed for research. The records may be requested for research under the provisions of the Public Information Act (Texas Government Code, Chapter 552). Refer to the overall restriction statement for instructions on requesting access through the Texas Attorney General.

Restrictions on Use:
Most records created by Texas state agencies are not copyrighted. State records also include materials received by, not created by, state agencies. Copyright remains with the creator. The researcher is responsible for complying with U.S. Copyright Law (Title 17 U.S.C.).

These records were transferred to the Archives and Information Services Division of the Texas State Library and Archives Commission by the Office of Governor on January 29, 2015.

Inventory of the Public relations materials