Description: Papers documenting the military career and life of Brigadier General John A. Hulen, who commanded the 72nd Infantry Brigade (1917-1919) and the 36th Infantry Division of the Texas National Guard (1922-1935), consist of correspondence, photographs, and scrapbooks, dating 1887-1960, undated. The correspondence mainly relates to recruitment activities in 1917 and includes letters and other documents. Photographs cover most of General Hulen's life, from his years in military school in the late 1880s to his retirement in the 1950s. Photographs from the 36th Division begin with the First World War and extend to 1960 and document military training, camp life, and early airplanes. Also present are aerial photos and official portraits of military personnel in the interwar period. The scrapbooks contain photographs, newspaper clippings, letters, telegrams, and printed materials that cover the course of General Hulen's military career, from 1887 to 1948.

Copyright information: Under the Copyright Act of 1976 as amended in 1998, unpublished manuscripts are protected at a minimum through December 31, 2002 or 70 years after the author's death. Researchers are responsible for complying with U.S. Copyright Law (Title 17 U.S.C.). 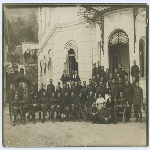